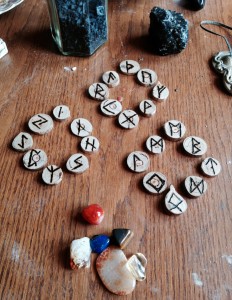 When I first met with the Runes I felt that something essential was missing, like the offering of information that I had at the time seemed an extremely diluted version of the well of information they contained (three wells actually). As a result, they were put aside until I could delve deeper…

Yielding to their call a number of years later, I began to absolutely devour whatever I could find on this ancient gift; a much easier task with access to a plethora of mythical tales, research articles, historical writings & references at the touch of a button. This information was then taken into many long, smokey, ceremonial sessions that drove the teachings of the Runes deep into my entire being.

The result of this venture, which lasted a few years, is a series of ritualised meditations to explore each Rune in turn, unfolding their story from beginning to end to new beginning, within the context of the life experiences of the individual participating.

It is a fascinating study to see the Runes roll out in a story like fashion, a dreamy tale with hidden pockets full of adventurous teachings. Each aett (group of eight) contains a clear cycle of its own, that can be worked in rhythm with the seekers own cyclical flow. One definition of the three aettir that I particularly relate to is from Freya Aswynn. To simplify enormously, the first aett can be read as the creation tale, the second aett the playing out of antagonistic forces, & the third aett the unfolding of the human condition which is the beginning of the end.

In offering these Runic meditations to others, I have been able to see how beneficial it can be to work with this ancient tool & have begun the journey for a second time myself… You can never do enough work on yourself, right?!

So, it seems that when I first met the Runes I was not ready to begin uncovering their secrets & I am very lucky that they called me back into their mystical world when I was ready.

If you are interested in learning more about the Runic meditation circles (held in Melbourne, Australia) please send an email to alison@thehedgewitchery.com